The Bad Boy. First you hate him, then you love him. Standing out from the crowd, he looks like he couldn’t care less what people think. He walks his own path but sometimes goes out of his way to be mean to you. He might even be antisocial or murderous, but who cares? He’s hot.

In the world of manga and anime, there are plenty of bad boys – check out Tumblr, you’ll be amazed. Many are brooding and mysterious, while some can’t seem to control their temper at any time. But whatever their initial characterization, they turn into mush when faced with the love of a Good Girl.

Whatever type of bad boy turns you on, there’s an anime series for you. Here’s our list of the top series that take the bad boy trope and bring it to new heights. When you’re done watching them, you might also want to take a peek at our list of the best cute romance animes.

Do all girls want bad boys? Horimiya (a portmanteau of the two main characters’ names, Hori and Miyamura) seems to say so. “Normal” teenage girl ​​Kyoko Hori really likes it when her boyfriend Izumi Miyamura abuses her. To be fair, though, he’s just a nice guy, and so he’s a little creeped out by it.

Izumi has nine piercings that he tries to hide with his long hair and tattoos on his arms that he covers by wearing long-sleeved shirts. He looks like the quintessential bad boy, so maybe that’s why Kyoko likes him. This girl has a type: the Bastard Boyfriend.

Released in 2021, this series has 13 episodes. It’s a cheerful and heartwarming romcom that’s an easy introduction to the bad boy genre.

Say I Love You is a perfect example of the popular bad boy getting together with the quiet good girl type of romance. It’s the story of Mei Tachibana, a high schooler who was bullied when she was a child. Her douchey so-called friends turned out to be toxic and shallow, so now she shuns other people.

Enter Yamato Kurosawa, a popular guy who’s known for having kissed almost all the girls in school. He falls in love with Mei because she’s different, and through their tentative friendship and budding romantic relationship, Mei ultimately comes out of her shell.

Over 13 episodes, the two protagonists realize that they have more in common than they first thought. Shoutout to Megumi Kitagawa – the sexy transfer student who tries to steal Yamato from Mei. Will she succeed? Watch the series to find out.

While riding the bus one night, Sakura Sakurakoji sees some people being burned alive by a blue fire as a boy stands over them, unharmed. When Sakura goes to class the next day, she discovers that the new transfer student is the same boy she saw. His name is Rei Ogami, and he’s a Code:Breaker, an assassin who’s a member of a secret government organization.

Ogami is a cold-blooded killer whose motto is “An eye for an eye, a tooth for a tooth.” Sakura, on the other hand, is a good girl who wants to save everyone. They’re essentially incompatible, plus Ogami is a jerk who gets off on insulting Sakura and humiliating her in public.

Nevertheless, both characters are more complex than they seem. The 13 episodes of the series cover their blossoming relationship as well as the backstories that made them who they are.

The story begins when teenage Nanami Momozono’s father skips town to escape his gambling debts. After being evicted from her home, she ends up saving a mysterious man, Mikage, from a dog. He offers Nanami his house as thanks when he learns that she’s homeless.

When Nanami reaches the place indicated on Mikage’s map, she finds an abandoned shrine instead of a house. She meets Tomoe, a bad-tempered Kitsune (shape-shifting fox-like creature). It turns out Tomoe had been waiting 20 years for his master, Mikage, to return, so it’s not surprising that he’s upset that Mikage has made Nanami his new mistress.

This 12-episode series has a Beauty and the Beast vibe, since Tomoe’s basically a terrifying demon and Nanami is the only one who can keep him in check.

Paradise Kiss, abbreviated to ParaKiss, is based on a josei manga series aimed at older teenage girls and young women. The story set in the world of alternative fashion became super popular globally and has been translated to at least ten languages.

The plot revolves around Yukari Hayasaka, a bookish high school senior who’s convinced by a pair of art school students to model for their fashion show. Afterward, they take her to the Atelier, where she meets the charismatic and handsome George, fashion designer extraordinaire in the making. A passionate yet rocky romance between the two ensues.

George is a hedonistic equal-opportunity lover (read: bisexual) with plenty of daddy issues. The 12-episode anime series shows his character arc quite well, and the details and textures in the hand-drawn fashion designs are *chef’s kiss*.

Ryo is a creepy 27-year-old womanizing salaryman who falls in love with Ichika after she saves him from falling down the stairs. She also gives him her lunch, so it’s understandable when he offers his own literal body to her in gratitude.

She rebukes him, but that doesn’t stop him from sending a flower every day to her house as a way to prove his feelings. Never mind that she’s only 17 years old and his younger sister’s best friend.

This romcom anime series was released in 2021, so it’s one of the newest out there. If the age-gap romance is your jam, you should check out its 12 episodes.

Ririchiyo Shirakiin is a 15-year-old rich girl without any social skills. Wanting to be independent, she leaves home and moves into Maison de Ayakashi (or Ayakashi Hall) to live with her fellow part-human, part-supernatural Atavists. Each of the residents has their own Secret Service (SS) agent; Ririchiyo’s is Soushi Miketsukami, a fox spirit in cute boy form.

Soushi would do anything to protect Ririchiyo, which doesn’t sound like a bad thing. However, the black bishie sparkle that surrounds him whenever he talks about her indicates a devotion that’s on the extreme side. You could say it’s an obsession.

Anyway, the original Inu x Boku SS manga series is made up of three parts and an interlude – 11 volumes in total. The anime tries to fit all of the events in only 12 episodes, but it works.

8. Snow White with the Red Hair

Shirayuki, a herbalist in the kingdom of Tanbarun, is known for her beautiful red hair. Of course, the unusual color attracts a lot of attention, but Shirayuki was raised to be careful about showing her hair in new surroundings. Why? Because Prince Raj Shenazard might notice it and order her to become his concubine, that’s why!

Shirayuki refuses, cuts off her hair, and escapes to another kingdom. She meets another royal dude on her travels, Prince Zen Wisteria. They eventually develop romantic feelings for each other, but don’t count Prince Raj out just yet. He’s decided to go on a self-improvement regimen to prove to Shirayuki that he loves her.

If you want to find out who Shirayuki ends up with, the series runs for 25 episodes and a 30-minute original anime DVD (OAD).

9. Engaged to the Unidentified

Kobeni is a perfectly happy teenage girl who lives with her mother and older sister Benio. On her sixteenth birthday, she learns that she’s engaged to a boy named Hakuya Mitsumine. The guy and his little sister come to live with her, so now she has to deal with a tall, dark, and silent fiancé and a new sister-in-law aside from her own crazy sister.

10. Kakuriyo: Bed and Breakfast for Spirits

Aoi Tsubaki is a college student who has the ability to see Ayakashi, or creatures of the night. One day, she sees an Ayakashi sitting on a torii shrine. He’s hungry, so she gives him some food – an excellent idea, for sure. Surprise: he kidnaps her and takes her to the Hidden Realm.

Then, he tells Aoi that she has to marry him to pay off her grandfather’s debt. Not wanting to marry a complete stranger – not to mention, he’s an ogre – she negotiates with him instead and offers to work at his inn, the Tenjin’ya.

This series originally ran in 2018, so it’s fairly recent, and it consists of 26 episodes. If you like your bad boy to be on the supernatural side, this one’s for you.

This anime series is also known as Akkun to Kanojo (translation: Akkun and His Girlfriend), and that is literally the plot. There are major stalker vibes in this one, but hey, the guy is pretty cute.

Akkun acts like he hates his girlfriend Nontan, but the truth is he’s totally infatuated with her. Besides following her everywhere and watching her every move, he’s plastered the walls and ceiling of his room with pictures of her.

Over 25 episodes, the series follows the couple’s interactions with each other as well as their classmates. Will Akkun the Tsundere eventually show his warmer, friendlier side, i.e., stop being a dick to Nontan? Watch it to find out.

(FYI: A Tsundere is a character who starts off as cold, stern, or temperamental but later becomes a big softie.)

Any romantic relationship has a good side and a bad side. In some cases, the two sides are literally the Bad Boy and the Good Girl. They may be some of the oldest tropes, but it can’t be denied that they make for compelling storytelling.

Did we leave out your favorite bad boy anime series or movie from our list? Let us know in the comments. 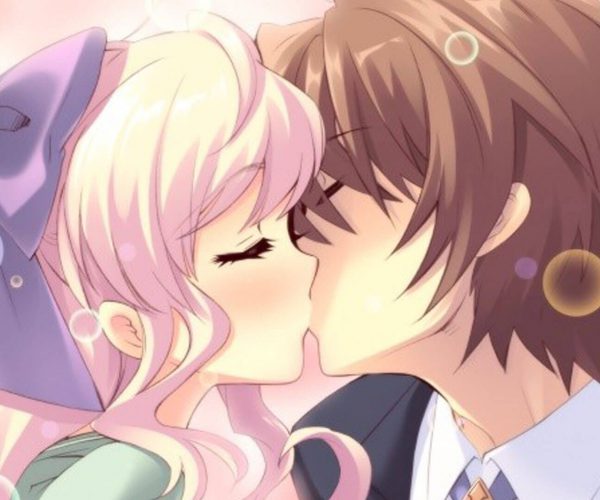